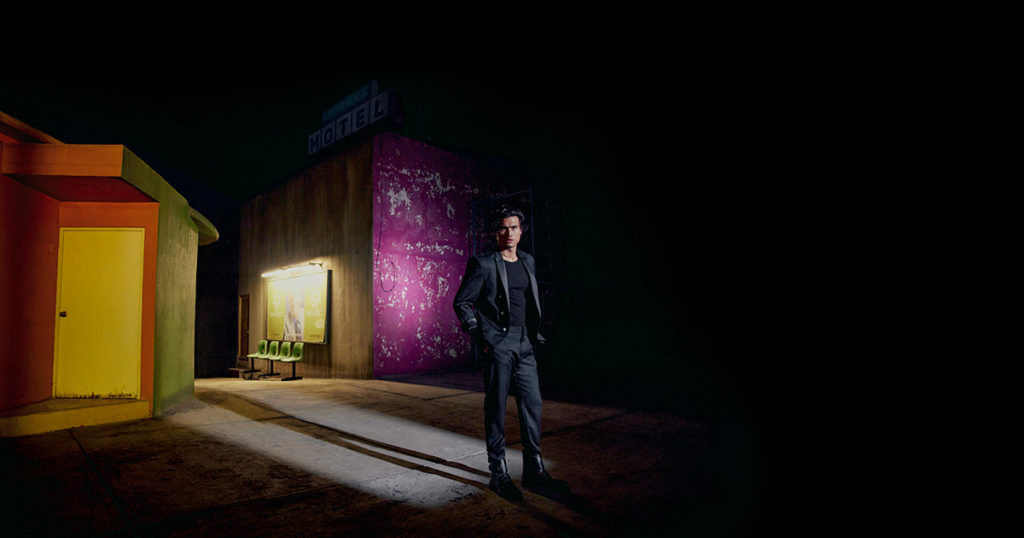 Fracture launches on the 2nd September coinciding with London Fashion Week. It represents Channel 4’s first ever branded entertainment drama series and the first time a fashion house has partnered with a broadcaster in this way – with the cast’s wardrobe featuring Balmain’s Fall 2021 designs throughout each of the 5 x 8 minute episodes.

Fracture is set in the desolate Le Rêve Motel on the outskirts of L.A., a shabby but charming landing spot for an array of colourful characters. We meet the mysterious Mya (Jesse Jo Stark), a struggling singer-songwriter who has fled her privileged life in New York for a solitary existence at the equally furtive Le Rêve.

Hers is a story of disaffection, of not being understood, and of not knowing where the hell you’re going with your life. Music is her passion, but why is she unable to write a note and why is she so unnerved when her sibling, Ari, (Tommy Dorfman) uncovers her whereabouts?

Against a brooding and melodic soundtrack, Mya finds a friend in fellow outsider Edie (Ajani Russell) who attempts to pull Mya out of her darkness and chaos. But it’s a chance meeting with the disarmingly handsome drifter and poet, Noa (Charles Melton), that really sets in motion a series of events that could propel Mya out of her solitude and completely change her life.

“Fracture helps to make very clear Balmain’s determination to continue to break down boundaries and engage in unexpected, compelling and entertaining ways with lovers of fashion, music and design,” explained Olivier Rousteing.

“Fracture’s story, writing, acting, directing and images are incredible—I loved being able to play a part in making this happen and I can’t get Jesse Jo Stark’s music out of my head.”

Matt Ford, 4Studio’s Commercial Lead said: “Fracture is testament to the fantastic collaboration and hard work of all those involved and we’re really excited to finally share this incredible drama series alongside Balmain.

4Studio is leading the re-invention of short-form branded entertainment, supporting the delivery of Channel 4’s Future4 strategy to accelerate digital growth. We’re looking forward to pushing boundaries together with more premium brand partners in the future to create quality content that our viewers love - wherever they’re watching.”

Thomas Pullen, Channel 4 Digital Commissioning Executive said: “It’s been a pleasure working with the team at Balmain, Sunshine and Pretty Bird to bring Mya’s story to life. Throughout the production of this series, the team have proven themselves to be wonderful collaborators and creatives always striving to push the boundaries of what’s possible. I’m thrilled for audiences to finally be able to see the series and excited at what the future holds for more great short-form drama on Channel 4.”

Fracture will be available via Channel 4’s YouTube channel and as a box set on All 4 and will be hosted on a bespoke co-branded website created for the series at www.fractureseries.com.

Balmain’s Olivier Rousteing was the Creative Director of the series, which was created by Michail Papadogkonas and Catherine Hope, written by Glenn Waldron and directed by Bradley & Pablo. Fracture was produced by Pretty Bird and the Executive Producers were Alya Nazaraly and Txampi Diz.

Channel 4 is the number one branded social content partner in the UK across all platforms and categories and is the only UK broadcaster to offer a slate of social-first branded entertainment opportunities to clients and advertisers for publication right across its quality, brand-safe, social channels – including Facebook, YouTube and Instagram, and All 4.