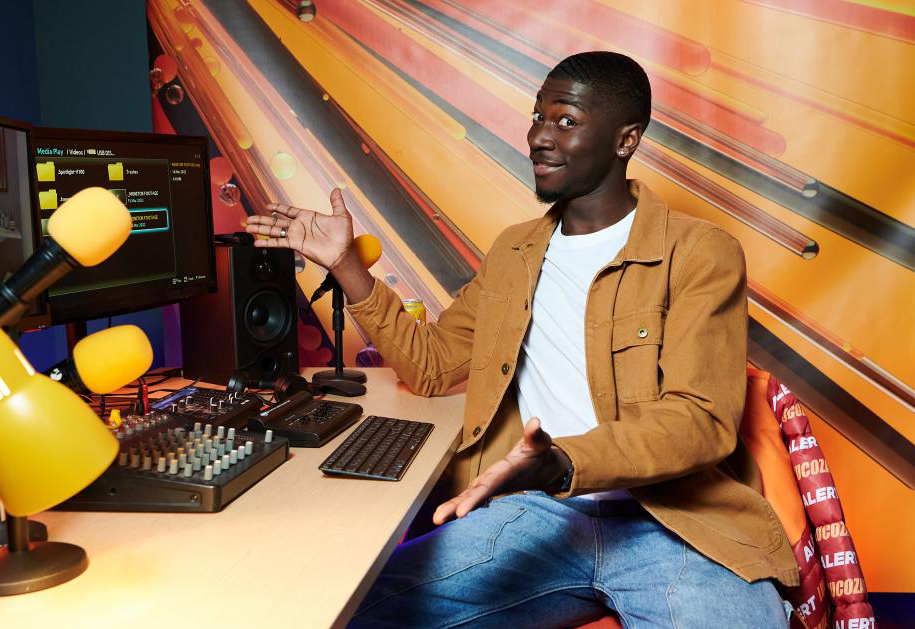 The five-part series is a new kind of immersive game show featuring comedians and celebrities including: Remi Burgz, Abi Clarke, Joel Dommett, Toussaint Douglass, Nick Helm, Guz Khan, Olga Koch, Lady Leshurr, Scarlett Moffatt and Katherine Ryan. The celebs will need to think on their feet as they are blind folded and driven to an undisclosed location where they’re immediately immersed, into a range of hilarious, real-world scenarios where they are the lynch pin. As soon as their blind fold is lifted, they must use quick wit and get sharp to nail their improvisation as quickly as possible.

Razor Sharp debuts this week on Channel 4 YouTube channels, whilst shorter edits of each episode will be released across Channel 4 and Lucozade Alert’s Facebook and Instagram accounts. In addition, a bespoke edit of Razor Sharp will form a new linear TV ad that will debut on Channel 4 on the 10th of June during Celebrity Gogglebox and air across the broadcaster’s portfolio of channels.

Razor Sharp is part of the brand’s ‘Get Sharp’ campaign, created and developed by adam&eveDDB, which aims to get Brits everywhere feeling sharper than they’ve ever felt, with a drop or two of Lucozade Alert.

The social-first branded content series from Channel 4 represents the first activity of its kind for Lucozade, in which its new high caffeine energy drink, Lucozade Alert, will be launched across Channel 4’s social channels. It’s part of a wider campaign led by adam&eveDDB – to creatively launch Suntory Beverage & Food GB&I’s new stimulant drink, Lucozade Alert which contains 160mg of naturally sourced caffeine and Vitamin B3 to contribute to the reduction of tiredness.

Zoe Trimble, Head of Lucozade at SBF GB&I, said: “Working with Channel 4 was a great opportunity to engage a younger audience with digital-first content to creatively showcase Lucozade Alert. Our brand-new stimulant drink helps contribute to the reduction of tiredness for our consumers with naturally-sourced caffeine supporting them to feel sharper for the day ahead, which aligns perfectly with the Razor Sharp series as the celebs put their wits to the test in a series of improv challenges.”

David Amodio, Deputy Head of Digital Innovation & 4Studio said: “We are thrilled to be working with Lucozade Alert for the launch of their new product. Razor Sharp is a great example of how through digital comedy commissions we can help our brand partners tap into our highly engaged young audience with quality, entertaining branded content.”

Channel 4 Digital Commissioning Executive, Joe Churchill, said: “This new challenge-meets-improv comedy series aims to bring humour and hilarity to our audiences and we have some fantastic names who have agreed to put themselves in some very unusual situations and the result is playful and mischievous, but with genuine jeopardy and good old authentic competition.”

David Williams, Executive Producer, Interstellar TV said: “Hats off to the plucky pairs of celebrities who agreed to be dropped into a whole new world with no prep, no plan and no clue. Whether they rose to the challenge or fell flat on their face, they each showed nerves of steel and made for brilliant viewing.”

Channel 4 is the only UK broadcaster to offer a slate of social-first branded entertainment opportunities to advertisers for publication across quality, brand-safe, social channels – including Facebook, YouTube, and Instagram.

4Studio is the number one Branded Content partner in the UK and its specialist commercial team has delivered numerous successful social-first campaigns in partnerships with brands including: the award-winning Mission: Accessible with Visit Britain, Unseen Kingdoms with The Body Shop, Fracture and Balmain, Untold: The Police with The Home Office, You Do You with Instagram, Flex Kitchen with Heinz and more.