Beat the Chef returns for a brand-new series. Presenter and restaurateur Andi Oliver hosts the culinary combat, as skilful amateur cooks compete in two fast-paced cook-offs to win up to £10,000, as they go head-to-head with one of our four professional chefs: award-winning Mark Sargeant, Roux Scholar Frederick Forster, executive chef Sophie Michell and Michelin-starred Hrishikesh Desai. In the kitchen today, former fighter pilot Chris Topham hopes that his beef stroganoff can hit the heights of £10,000. But chef Mark Sargeant is out to prove that he's the top gun when it comes to cooking. Will Chris rise to the challenge of Mark's whole plaice with bourguignon sauce? Filmed across a year in one of the UK's leading foetal medicine units, this three-part documentary series tells the stories of pregnancy and childbirth through the eyes of the women and the medical teams who treat them. This episode follows three women and their partners who must decide whether to intervene with nature and put their trust in pioneering, but high-risk surgery in order to save their babies' lives. Susie is 16 weeks pregnant and carrying triplets. The babies may have a life-threatening blood sharing condition called twin-to-twin transfusion syndrome. If left untreated there's a 90% chance Susie will miscarry the whole pregnancy and lose all three babies. Noreen's baby has a rare condition called amniotic band syndrome, where its foot is tangled up in the lining of the womb and is at risk of being amputated. Noreen and her husband must decide whether to intervene and save the foot in order to give their baby a better chance at a normal life. Zoe is 36 weeks pregnant and has found out that her baby has fluid building up in its brain. The parents face the realisation that control over their baby's life is out of their hands. Hosted by actor and producer Will Arnett, Lego Masters USA brings imagination, design, and creativity to life. Teams of two compete in ambitious challenges to be crowned the USA's most talented amateur Lego builders. In this episode, Phil Lord and Christopher Miller task the contestants with a movie-themed challenge. In the current economic climate and with the business sector on its knees, this new series seeks to show that shrewd decisions can help businesses navigate the post-pandemic economy and still deliver a profit. We follow The Money Maker - serial entrepreneur and seasoned investor Eric Collins - in his quest to offer not only his expertise and unrivalled business acumen, but also his own capital investment to four small struggling British businesses. Each week, Eric visits a different company in the UK, offering a game-changing investment designed to turn its fortunes around and equip it for growth. In return, he'll take an equity stake in each business, call the shots and take charge of the transformations he wants to see happen. As the CEO of Impact X Capital - a venture capital firm supporting underrepresented entrepreneurs across Europe - Eric invests millions of other people's money, but this time it's from his own pocket... and it's personal. In the first episode, The Money Maker is in Manchester checking out repair and restoration company Prymo. Lively CEO Jasen says he's never been busier, but Eric wants to know exactly what's been keeping him busy as there isn't enough profit to expand. It's down to Eric to get Jasen to focus on just one aspect of his business at a time, but will the tempestuous relationship between them end up costing Jasen his entire company... and take Eric's money with him? With the most important pitches of his career coming up, Jasen needs to focus. But will the pair ever agree on an investment deal? Architectural designer Charlie Luxton helps more people build affordable dream homes. Charlie's in leafy Surrey with Chris and Gemma, who are aiming to build an Arts and Crafts-inspired home of grand proportions. Charlie's advice leads them to take some drastic action, but their determination to juggle doing most of the work themselves with a growing family means progress grinds to a halt, leading Charlie to question whether they'll ever finish this epic build... Glamping is on the rise in Britain, and it's no longer just a posh tent in a field. Up and down the country, people are repurposing old vehicles into stunning boutique hotels. And now, a most unlikely person is about to join the fray. Award-winning comedian and entertainer Johnny Vegas wants to create the country's coolest glamping site. Together with his long-suffering assistant Bev, he buys an old Maltese bus online. It seems a bargain, but all is not as it seems! Across this series, we follow Johnny, Bev and a gang of vintage bus enthusiasts, as they attempt to bring new life to a collection of old vehicles as the clock is ticking to get the site open in time. When the coronavirus pandemic hits, the whole project is in jeopardy. But when their luck begins to change, Johnny's bus renovation slowly starts to take shape. It's time to buckle up, keep calm, and carry on glamping! In this first episode, Johnny and Bev set about buying the old Maltese bus online. It seems a bargain, but Johnny discovers that it's still in Malta, he must get on a plane to collect it, and it's not in the best shape! With a potential site in Wales falling through at the last minute, and friends and family telling him to give up, so begins a series of adventures and misadventures as Johnny tries to remain calm and carry on glamping. Canadian drama following Dr Jenny Cooper, a recently widowed Toronto coroner, who investigates suspicious, unnatural or sudden deaths in the city. In the opening episode, Jenny's called to investigate the death of a teen in a youth detention centre. Her own life is upended by the untimely death of her husband, as she learns to raise a teenage son on her own. 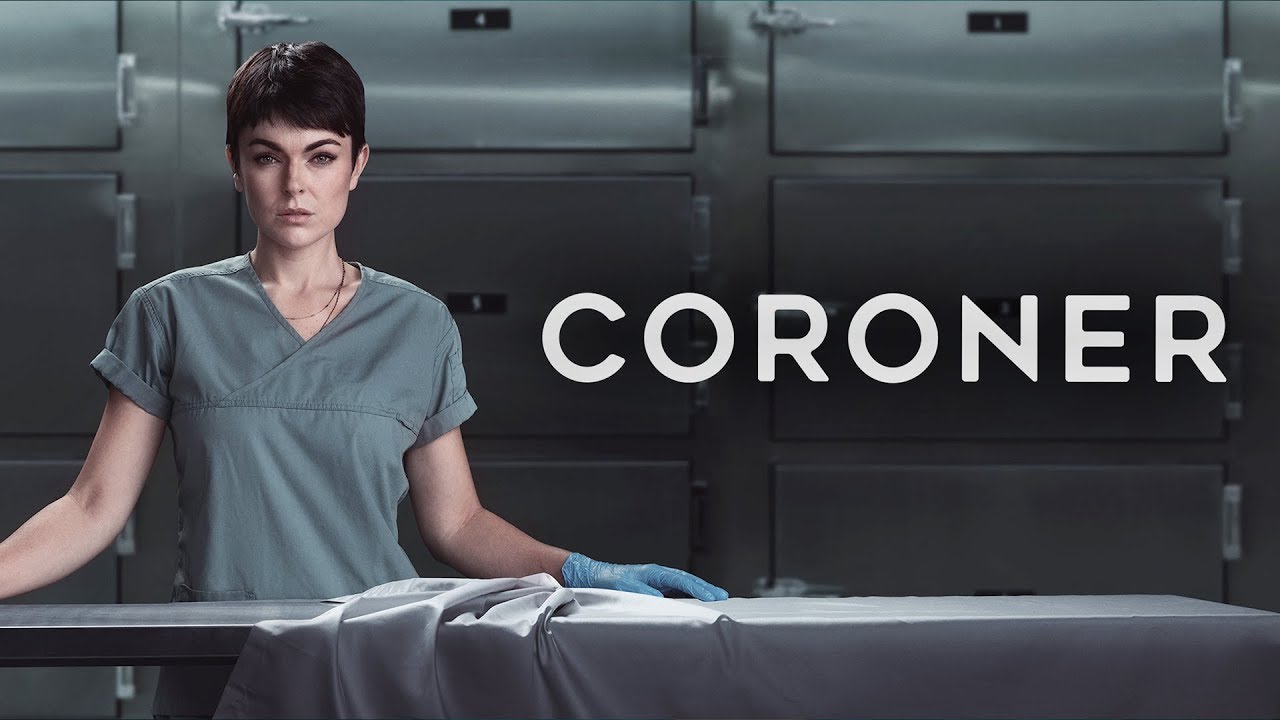 Comedy starring Brian and Domhnall Gleeson. Malahide Community Centre is hosting an am-dram performance of Twelve Angry Women: The Musical - an all-female take on the classic movie. When Frank discovers that Padraig has recruited Doofus to write the songs, he's determined to share the limelight and muscles in on Doofus's set list. But with opening night approaching, Frank's songs aren't getting the positive response he'd hoped for - and there's growing concern that he's based his lyrics on the wrong movie... Meanwhile, Doofus's material is going down a storm. How far will Frank go to be the star of the show?

Brits spend a whopping billion pounds a month on takeaway grub. In this special edition, the Food Unwrapped team deliver some fascinating food facts from around the world concerning some of our Friday night favourites. Jimmy Doherty is in Thailand to discover an unexpected addition to spring rolls. In India, he locates the flavoursome heart of our takeaway curry - ghee. Amanda Byram spills the beans on coffee and why some cups leave us more buzzing than others. And Andi Oliver looks at how doner kebabs are made before heading to the award ceremony known as the 'Kebaftas'.

Walter Presents - which showcases the best foreign language drama series from around the world - continues with the character-driven Italian crime drama based on a cop from Italian crime fiction and set in the snowy mountains of northern Italy. Rocco and his team are called to investigate the case of a dead woman found hanging from a chandelier. Everything suggests suicide though something doesn't feel right to Rocco. If this is a set-up, who would have gone to such elaborate lengths to stage it? In Italian with English subtitles. 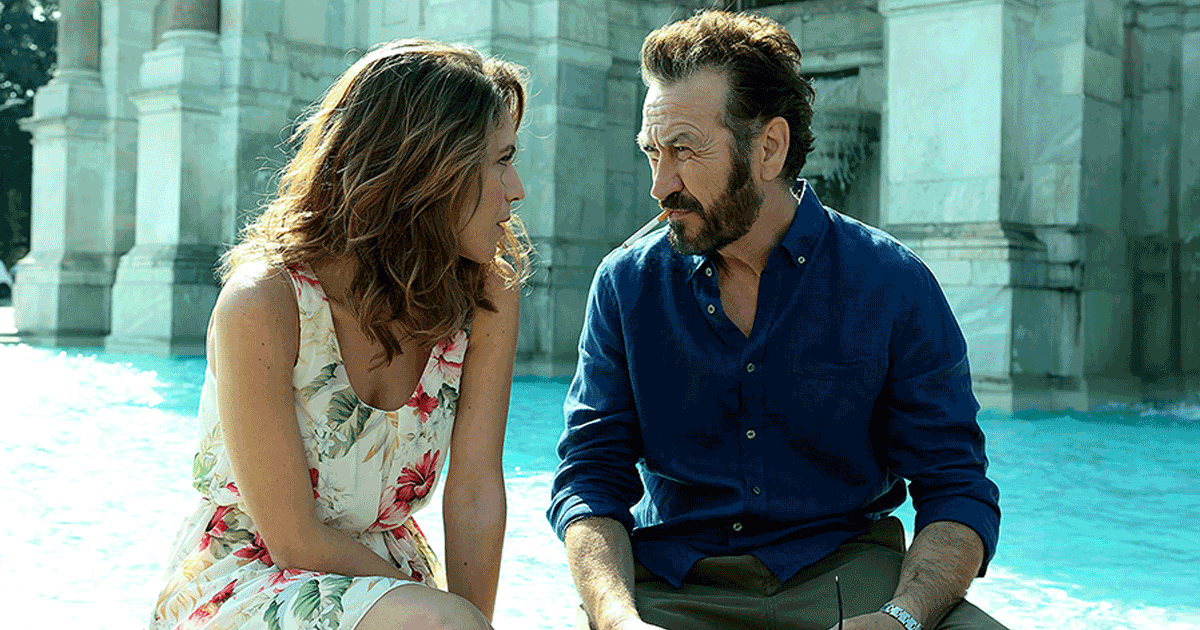 Chris Pine, Jude Law, Hugh Jackman, Isla Fisher and Alec Baldwin lead the voice cast in Peter Ramsey's animated fantasy-adventure for DreamWorks. It is the job of the Guardians - who include Father Christmas (voiced by Baldwin), the Tooth Fairy (Fisher), the Man in the Moon, the Sandman and the Easter Bunny (Jackman) - to watch over the children of the world and keep them safe, and to bring them wonder, hope and dreams. But, one day, Santa (or North to his friends) witnesses a disturbing vision of the Guardians' enemy, Pitch Black (Law) - who's been quiet for centuries - enveloping the globe in fear, darkness and nightmares, and destroying children's belief in the Guardians. The Man in the Moon confirms North's suspicion - and appoints a surprising new Guardian: irresponsible prankster Jack Frost (Pine). How can he help the Guardians defeat Pitch? Gerard Butler heads up a crack unit of LA cops endeavouring to foil a crack team of ex-marines turned bank robbers in this action thriller. 50 Cent's in it too. When a gang of well-drilled heist-merchants led by Ray Merrimen (Pablo Schreiber) hijack an empty armoured truck, it sets alarm bells ringing, literally and figuratively, for 'Big Nick' O'Brien (Butler), who heads up a specialist unit within the LA Sheriff's Department. Could this gang be responsible for a spate of crimes in the city? And what on earth do they want with an empty van anyway? They're going big, Big Nick decides. Spot on, Merrimen's band of merry men are looking for their biggest score - the Los Angeles branch of the Federal Reserve, the only bank that hasn't been robbed. Get the feeling this is about more than just the money? One thing's for sure, Merrimen ain't cuffing up. But that's okay, Big Nick didn't bring his cuffs. So, it's head shots only and 'do we look like the kind of cops that'll arrest you?' And let's see who's standing at the end. As Batwoman attempts to fight the proliferation of Snake Bite through Gotham, a random encounter forces her to revisit her painful past. Empowered by her new role, Ryan is determined to ensure others like her don't go unnoticed. And those closest to Kate are given good reason to believe she's still alive, forcing unexpected alliances and betrayals. 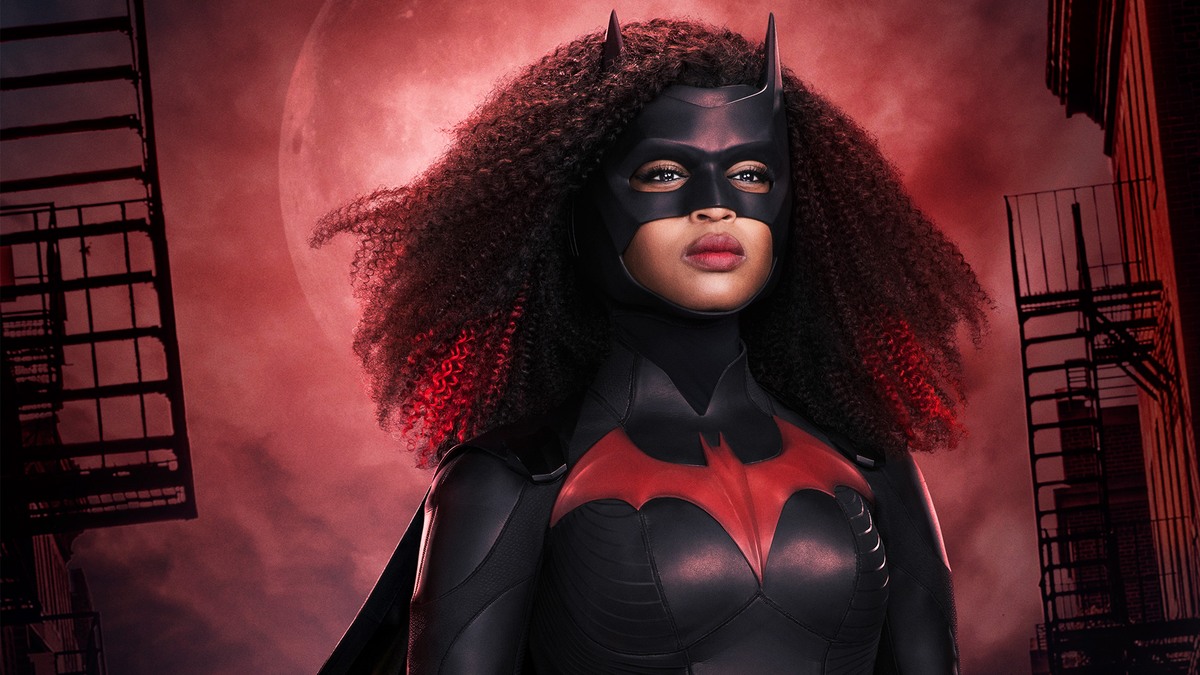 Ex-Special Forces soldiers put recruits through a recreation of the SAS selection process. In these uncertain times, 21 men and women head into the wilds of Scotland to be put through the toughest and most unforgiving selection course yet. Chief Instructor Ant Middleton and his team of Directing Staff (DS), Foxy and Billy, are joined by ex-SAS operative Melvyn, as they employ some tough, never-previously-seen tasks. For the DS, the Highlands is where their Special Forces skills were honed. For the nervous recruits, the remote Scottish island of Raasay will be a terrain that pushes them to their limits. In the first episode, the new recruits face an intense start. Selection begins with an ambush, as the DS hijack the train the recruits arrive on. Looking for the kind of recruit that can handle anything thrown at them, the DS pit them against each other in a race up a 4000-foot mountain, followed by a 100-foot abseil off an oil rig. When the pressure is applied, who will have the strength of character to progress and who will let nerves get the better of them? 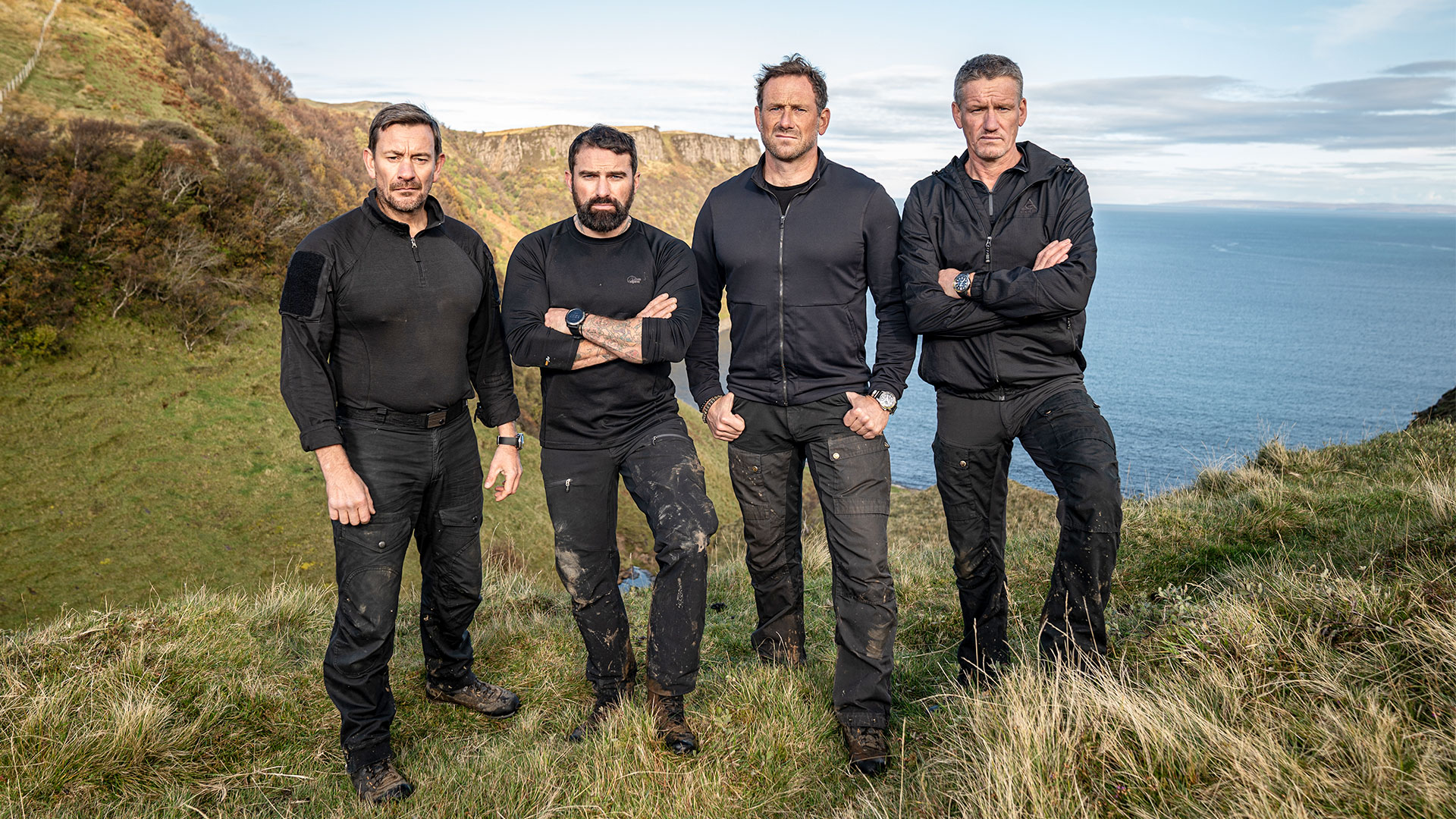