GAMESMASTER TO REBOOT ON E4

It’s been off our screens for 23 years, but the iconic series, GamesMaster is set to make a return to E4 later this year, in partnership with Oculus Quest 2 from Facebook. 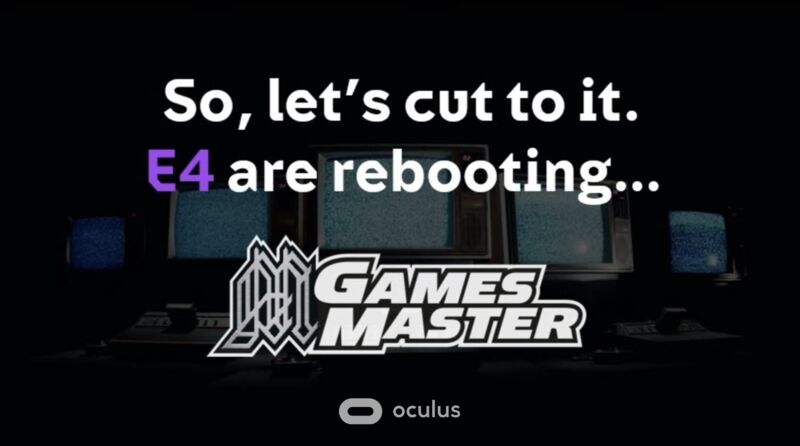 It’s been off our screens for 23 years, but the iconic series, GamesMaster is set to make a return to E4 later this year, in partnership with Oculus Quest 2 from Facebook

In this new E4 Digital Original Commission co-produced by Barcroft TV, a Future PLC company and Alaska TV, the 3x60’ series will premiere on E4’s YouTube before a linear TX on E4. It is the first fully cross-platform branded entertainment deal of this type from 4Studio.

The series will see celebrities, gaming stars and super fans all take part in challenges, races and epic fights. Through virtual battles across a range of games, the competitors will try everything in their power to claim a legendary Golden Joystick Trophy. But whilst they play, they’ll be watched over by the all-knowing GamesMaster, famously portrayed in the original by Sir Patrick Moore.

To introduce GamesMaster into the modern era of gaming, E4 has partnered with Oculus from Facebook to showcase Oculus Quest 2, a VR headset that will elevate the players experiences and break out of the two dimensional.

GamesMaster, a Future PLC brand, launched in January 1992 and ran for seven series. The series was the first British show dedicated to gaming and across the run, became a cultural phenomenon with names such as Ian Wright and Zoe Ball as celebrity guests and a young Simon Amstell as a hopeful contestant.

Sacha Khari, Head of Digital Commissioning at Channel 4 said: ”GamesMaster was a household name back in the 90’s and this new revamped version for social and E4 retains the elements that made this show so special, whilst also bringing it bang up to date, improving game quality and bringing in fresh and current names to tackle the trickiest GamesMaster challenges yet. ”

John Farrar, Executive Producer from Barcroft Studios said: “I grew up watching GamesMaster and feel a real sense of pride and responsibility in bringing this ground breaking brand back to life. We are beyond thrilled to be partnering with Channel 4, Oculus Quest 2 from Facebook and Alaska TV on this cross-platform, social-first proposition. Although the games have changed, the energy, mayhem and punk spirit of the original show will be unmistakably the same.”

Ian Lamarra Executive Producer from Alaska TV said: “Bringing back a much-loved brand is a huge responsibility, but I am excited by the challenge. Two thirds of adults now call themselves gamers and games now look better than movies. There has never been a better time to relaunch the definitive gaming TV series. It is fantastic to be the first fully cross platform branded deal of its kind which will ensure everyone has a point of entry. Oculus Quest 2 from Facebook are the perfect partners for this and we want huge fans of the series to embrace our new take as well as welcoming in a whole new audience.”

Matt Ford, Commercial Lead for 4Studio said: “It has been truly fantastic to bring a new lease of life to this nostalgic series and partnering with Oculus Quest 2 from Facebook, will add a whole new dimension of gameplay to this format. Not only that, but it’s the very first branded entertainment deal we’ve done that see’s the series debut on social before its linear TX. We hope fans of the original series are going to love this reboot and I cannot wait to welcome a whole new audience to the GamesMaster world.”

Aaron Hoffman, Head of International Marketing, Facebook Reality Labs said: “GamesMaster is a show with cult status among the gaming community, so we’re really excited to be partnering with Channel 4 to combine that great gaming heritage with the fully immersive VR gameplay offered by Oculus Quest 2 from Facebook. By authentically embedding Quest 2 gameplay directly into the show, viewers and contestants will be exposed to an unrivalled VR gaming experience. We hope that diehard fans of the series will enjoy it and look forward to a whole new generation of fans discovering it.”

All episodes will premiere on E4’s YouTube, followed by a linear play on E4. Further information on the casting, including the face of the GamesMaster, will be revealed in due course.

The partnership with GamesMaster and Oculus Quest 2 from Facebook was brokered by 4Studio working with Mindshare Invention and also includes a digital ad campaign for All 4.