Channel 4 joins forces with the RNIB and 6 major advertisers to raise awareness of Audio Description.

Channel 4, in partnership with the Royal National Institute of Blind People (RNIB), has teamed up with Airbnb, BT Broadband, Experian, P&G brands (Gillette & Oral B) and Virgin Media to create a multi-brand ‘A.D. Ad-Break’ takeover to demonstrate the importance of Audio Description (AD) - an additional commentary that verbally explains what’s happening on screen.

The unique campaign will have the participating brands split evenly across two ad-breaks within the Paralympics Opening Ceremony and The Last Leg on August 24th, as well as during live coverage and highlights of the games on August 25th.

Both breaks will see the brands normal 10” adverts repurposed by Channel 4 and graphically treated to distort the visual experience and make them hard to see -demonstrating what it is like for someone with sight loss to watch TV using AD and directing audiences to hear and engage with the audio description recorded by presenter and comedian Alex Brooker.

The campaign is designed to highlight the importance of AD by raising awareness of its availability for blind and partially sighted audiences. Additionally, the campaign will also encourage other brands to increase the number of ads they make available with AD to support viewers with sight loss.

According to the RNIB there are around 2 million people who have sight loss and a number of these aren’t active users of AD who could be benefiting from it. Whilst many programmes can be accessed via AD, less than 2% of adverts Channel 4 receives are delivered with it which means brands could be missing out on blind and partially sighted consumers worth an estimated £16 billion annually.

The ad break will open with a Channel 4 branded introduction to explain the context of the campaign as well as a closing message that thanks participating brands and direct audiences to rnib.org.uk/ad for further information.

David Clarke, former Paralympian and Director of Services at RNIB, said: “The Paralympics is all about empowering people with disabilities and demonstrates what changes need to be made to make society more inclusive for those with sight loss and other disabilities. The fact that blind and partially sighted people watching the games from the comfort of their own homes will be able to engage with both the programmes and ad-breaks at the same time as their sighted peers is a massive turning point in breaking down the barriers that still exist for people with sight loss. We are extremely grateful to have had the chance to work with Channel 4 to make this happen.”

Verica Djurdjevic, Chief Revenue Officer at Channel 4 said: “We understand that not every advert can be produced with AD but we also know that many more can, which is why we are thrilled to team up with the RNIB and our advertisers to help find ways to improve awareness for this extremely important service. It’s vital Channel 4 ad-breaks are as inclusive as possible, and that blind and partially sighted people are able to enjoy the same TV experience as everyone else”.

Channel 4 has a strong track record in partnering with brands and agencies to deliver award-winning, innovative and creative ad break takeovers with an important message at their core including taking a #StandAgainstRacism alongside the UK supermarket sector; standing #TogetherAgainstHate to highlight the abuse and violence carried out against customer facing staff in the UK and bringing together 39 brands in the first national moment to thank the NHS and #ClapForOurCarers.

The campaign was produced by Sassy Films with support from accessible advertising specialist; Adtext. 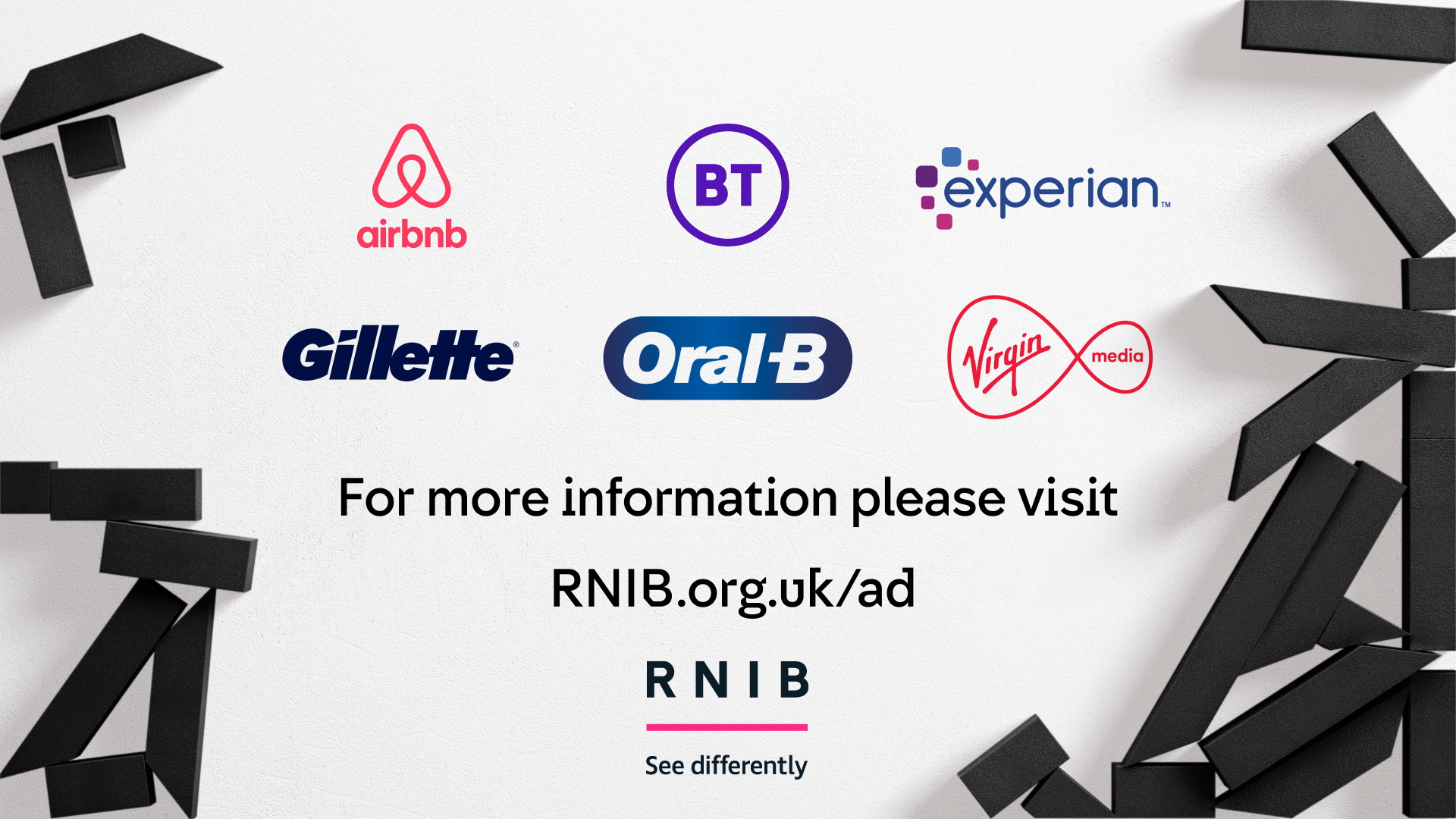