Channel 4 and Nationwide Building Society have joined forces with Co-op and Network Rail to highlight the abuse and violence carried out against customer facing staff in the UK in a primetime thought-provoking Channel 4 ad-break takeover.

The impactful #TogetherAgainstHate campaign features recordings and CCTV footage of both verbal and physical abuse experienced by each companies’ employees and delivers the important message that violence and threatening behaviour is never ok.

The ad break will air during Gogglebox on Friday 16th October 2020 and illustrates some of the 400 plus abuse incidents that UK customer facing staff experience every single day that are perpetrated by a small minority of people.

Throughout the break an employee from each brand warmly reflects on why they love working with the general public. However, this is starkly overlaid with recordings of severe verbal abuse aimed at Nationwide Building Society’s call centre staff. Newspaper headlines demonstrating the scale of physical and verbal abuse experienced by Co-op’s retail employees is shown in their ad. Whilst in Network Rail’s ad actual examples of harsh verbal abuse and CCTV footage of physical abuse suffered by their staff is shown – all drawing attention to the impact this has on the real people simply carrying out their jobs.

In between each brand’s ad, statistics demonstrate to viewers the concerning extent of this issue before they are encouraged to ‘work together to build a more tolerant and mutually respectful society for everyone’. The ad break will carry the hashtag #TogetherAgainstHate enabling the conversation to be continued and viewers will be pointed to online support page www.channel4.com/TogetherAgainstHate for more information.

Matthew Salmon, Interim Sales Director, Channel 4 said: “Partnering with the Together Against Hate campaign is an opportunity for Channel 4 to do what we do best - using the power of TV to encourage debate and inspire positive societal change.

Customer facing staff up and down the country are vital in helping us all, day-in, day-out and abuse of any kind should never be tolerated.”

The campaign builds on 2018’s multi award-winning #TogetherAgainstHate collaboration between Nationwide Building Society and Channel 4 supported by Maltesers and McCain which took a stand against online abuse and encouraged viewers to consider the impact of divisive and hateful comments online.

Sara Bennison, Chief Product and Marketing Officer, Nationwide Building Society said: “Mutual respect is a core value for us at Nationwide – we believe society thrives when we are all more accepting and respectful of one another. In 2018 we could no longer be bystanders watching the growing online hate directed towards the real people in our TV adverts – we took a stand against the abuse then and we’re taking a stand again today. This time for our frontline colleagues who dutifully help our members day in and day out and have been subject to verbal and aggressive behaviour which is simply unacceptable. We know we’re not alone in experiencing this which is why we reached out to partner with Channel4, The Coop and Network Rail so we can stand together against hate in a time where fostering greater mutual respect has become more important than ever.”

Jo Whitfield, CEO, Co-op Food, said: “Violence and abuse against shop workers have reached intolerable levels and we are pleased to be taking a stand alongside our colleagues in the travel and financial services sectors to say enough is enough, as we urgently need a reset in society to help protect people who are simply going to work. Our customer facing key workers form a vital part of everyday British life and have worked tirelessly over the past seven months to keep the nation going. We will continue to push the Government to provide greater legal protection for shopworkers and our support of Alex Norris MP’s Assaults on Retail Workers bill, which is due to get its second reading later this month, remains steadfast.” 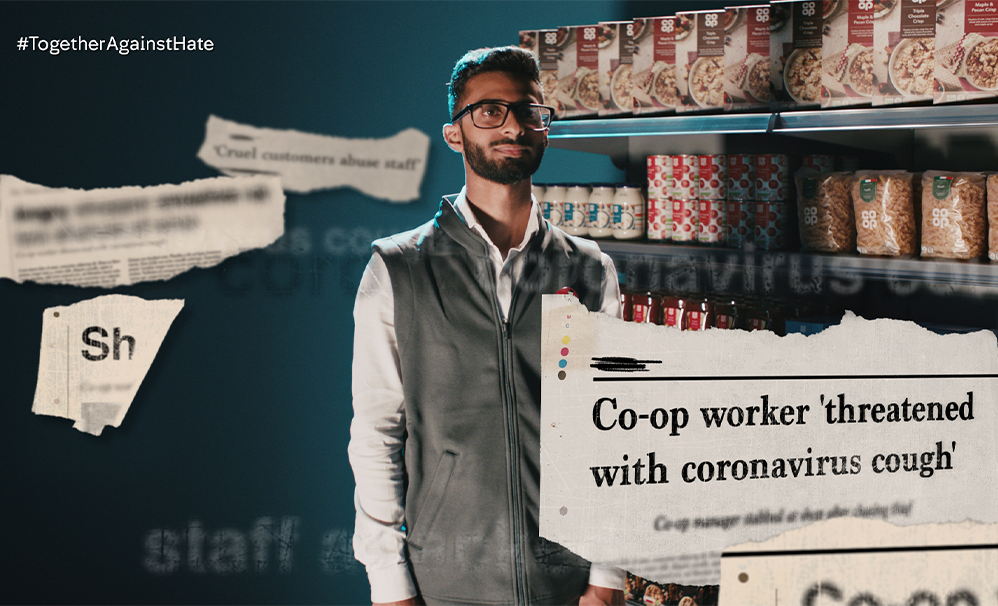 Norrie Courts, director of stations at Network Rail, said: “Customer-facing station staff play a crucial role in helping our passengers travel safely and reliably by rail. There have been fewer passengers since March with many people working from home, but our station staff – whether working on a gate line, undertaking extra cleaning, offering travel advice or passenger mobility assistance – have continued to turn up for work throughout the pandemic to ensure key workers and others relying on rail can travel and use stations safely.

The last thing these hard-working and dedicated staff should face is violence and abuse, yet it happens all too often. We urge all passengers and station users to treat rail staff with respect and consider the impact their harmful words or actions could have on the mental and physical health of others.” The ad break activity was brokered by 4Sales, Wavemaker (Nationwide Building Society), The Story Lab (Co-op) and UM Birmingham (Network Rail).  The idea was developed in partnership between 4Sales' creative arm PL4Y and The Outfit, who also produced the work.

The campaign is currently live and has been extremely well received being referenced in: Campaign Magazine, Marketing Week, The Drum, Creative Review, Prolific North, Mail Online and The Daily Express.

Or shared support in general:

We sent a survey to our Core 4 community, which is made up of a subset of our All 4 registered viewers. In total, we collected 465 responses.

Respondents were asked a variety of questions around their perceptions of the themed ad break, how it made them feel after watching the campaign and the impact it had on them.

The results were extremely positive and can be viewed in detail here: Together Against Hate Core 4 Research